You are here: Home / Working with Dreams / Nightmares & Dream Terrors / sleep paralysis / Sleep Paralysis Treatment – Stop Feelings of Being Held Down at Night Sleep Paralysis is a troubling sleep condition that is deeply misunderstood in our culture. Experienced by millions as an incubus attack or being “ridden by a witch,” sleep paralysis (SP) has biological causes that are related to sleep hygiene, stress, and insomnia.

In SP, you are aware of the body’s paralysis that normally comes with REM (dreaming) sleep.  This paralysis is what keeps us from acting out our dreams: a pretty important evolutionary skill that prevents us from injuring ourselves or our sleeping partners when we are dreaming about hunting tigers and bears.

This muscle paralysis is really frightening if you don’t know what is happening.  It can feel like being pushed down into the bed, being suffocated, or like a heavy weight crushing down on the chest and throat.

And meanwhile, you feel like you are awake, with full thinking capabilities.

This is the original waking terror that inspired the word “nightmare” which is old Anglo-Saxon for “a crushing sensation at night.”  The image above is Henry Fuseli’s Nightmare, painted in 1781, depicting an incubus demon sitting on a woman sufferer’s chest.

SP can also be a symptom of a more serious disorder, such as sleep apnea or narcolepsy.  However, isolated sleep paralysis (ISP) is not a dangerous condition, despite how terrifying it seems at the time.

About 20% of the time, ISP is accompanied by realistic, and often frightening, hallucinations. In my opinion, the underlying physical causes of ISP do not invalidate the psychological impact these visions can have on dreamers.  Known as hypnagogic hallucinations (HH), these dreams are literally projected into the waking realm where we are laying down with open eyes.  All over the world, across cultures and throughout recorded history, people have told tales of being sat upon by demons, ridden by witches, and haunted by spirits when they are in sleep paralysis.

A scientific worldview does not invalidate these claims, as medical historians and folklorists have argued for over 30 years.  The night visitations of ghosts, monsters, vampires (and even aliens in many contemporary accounts) are psychologically real encounters, not simply stories that are fabricated because of a belief in ghosts and goblins.

These visions can be terrifying, and they can be equally life-changing.

Why demons won’t go away So how do we cope with nocturnal spirit attacks in the 21st century?

Sadly, many people do not share their experiences, for fear that they will be laughed at, or that they are losing their sanity.  Others try to forget these hallucinations in the daylight of reason, but stay up late at night afraid to go to sleep.

This problem has affected me too, as someone who has suffered from isolated sleep paralysis with hypnagogic hallucinations (ISP/HH) for most of my life.  In fact, one of the reasons why I studied dream research in grad school is because I needed to find away to face these lucid nightmares that were robbing me of sleep and negatively impacting my life.

In the last five years, I’ve freed myself from unwanted nightmares, thanks in part to my nightmare reseach and dreamwork, and also to a supportive community and family.

A Holistic Approach to Sleep Paralysis

My solution is an approach that treats sleep paralysis and the accompanying visions in a manner that respects the physical, mental, cultural and spiritual levels of the phenomenon.  This holistic approach to ISP/HH allows us to untangle the various influences on the experience.

In this way, we can work with each “thread” to reduce the nightmares, lose the fear of the unknown, and start getting better rest again.

With time, these unique visions can also become a reliable gateway to other extraordinary states of consciousness, including lucid dreaming, out-of-body experiences, ancestral encounters, and guided journeys to realms beyond our imagination.

To learn more about sleep paralysis, I invite you to download my free Sleep Paralysis Report. This 14 page report discusses the symptoms, causes and practical ways of managing sleep paralysis– such as how to wake up from sleep paralysis and how to prevent multiple occurrences in the same night. 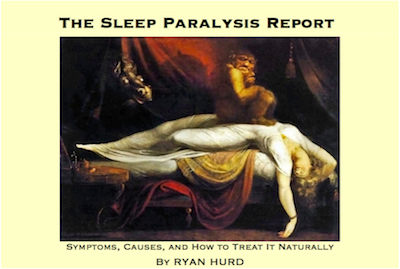