Lucid dreaming is practically a household name now, but so many confusions and misconceptions persist about what it really is like to be aware you’re dreaming.

Part of this issue stems from the wealth of introductory information on lucidity that caters more to what people want rather than what is really going on in the dream: I’m talking about wish-fulfillment here on a grand scale, powered by the lowest common denominator in marketing and search engine traffic.

Another part of the issue is that the lucid dreaming “community,” the scholars, dream workers and self-appointed teachers on the topic, are actually coming from vastly different paradigms about the potentials of lucid dreaming. We all have our darlings (me included!) — Our worldviews quite literally structure what is and isn’t possible.

In my own research into lucid dreaming (Hurd 2014, 2015, 2020), I have been working to place lucid dreaming into a cross-cultural and psychologically-mature perspective that allows for all the various eccentricities of the state of consciousness without watering down the boundaries of what “lucidity” means.

My conclusions: Turns out, there isn’t a World of Lucid Dreaming, but at least three.

The Three Worlds of Lucid Dreaming

Guess what?   All of these potentials are true! People have wildly different experiences in their lucid dreams based on their interests, personalities and cultural background/beliefs about the cosmos. And within a lifetime, we can experience lucid dreams from all of these worlds, even though we may not know how to act or behave at first.

For simplicity’s sake, we can envision all three of these potentials as the three levels of the cosmos described by First People around the world: the Upper, Middle and Lower worlds.

Middle World: Realm of creativity, where lucid dreamers enact waking life tasks and remember pre-conceived “bucket list” type intentions. Dreamer’s focus is on the ability to affect change, and recreate waking life scenarios (including athletic performance) in order to discover something new or experience something novel.

What kind of lucid dreamer are you?

What kind of lucid dream world attracts you the most?  Which one repels you?  There’s no right or wrong.  In fact, I’ve explored (and sometimes, avoided) all these realms over the years, and the strongest pull is constantly changing.

I’ve found this simple frame can be helpful for dreamers to zero in on their strongest intentions — because it’s the strong intentions that will be the most successful in the dreamworld.

Sound interesting?  I’ll be exploring this concept and going further with it than ever before at the online conference Many Worlds of Lucid Dreaming October 29 – November 12, 2022.  Join me and 12 other lucid dream experts as we present and build two weeks of community discussion. Student pricing is available to0.  Learn more here. 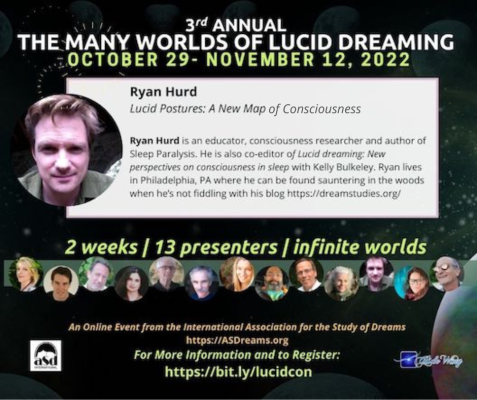