The veil gets thinner as we approach Halloween and Day of the Dead. This time of year, harvest feasts and remembrance festivals are common around the world, as they have been for thousands of years. The end of October is a cross-quarter day–the halfway mark between the Autumnal Equinox and the Winter Solstice. There’s food (and pumpkin spice lattes), dances (or political rallies), and let’s not forget… the dead come back to life.

Personally, I love this time of year because it’s briefly socially acceptable to talk about spirits.  We plaster ghouls on our doors and windows and children dress up as skeleton archers from Minecraft (at least, that’s what my four year old son is ready to do).

And for those who suffer from sleep paralysis, it’s the perfect time for telling spooky Real Life stories around a campfire without being shamed.

Because, let’s face it, sleep paralysis and its associated visions are a major cause of ghost sightings as well as ancestral encounters (such as the Japanese tradition of Kanashibari “the ghost that binds you,” depicted below).

Here’s a lovely example of how spirits show up in sleep paralysis accounts, first published in a Japanese newspaper over fifty years ago and reprinted in the scholarly journal Dreaming,

“One night in July 1961, Mr. Ishida, a chief mechanic, had a dream of a sailor while he was sleeping in the nap room at Tsuiki Airforce Base, which was a commando-type air force base during WWII. The sailor wore a uniform and said he had been killed by being caught in a spinning airplane propeller. While he was dreaming, Mr. Ishida felt a heavy weight on his breast and couldn’t move an inch, though he struggled to. Mr. Ishida examined the history of this air force base and learned that there had been such an accident in the past.”1

My point isn’t on the potential historical accuracy to this event (which I can’t prove), but rather that the event was so compelling for this sleep paralysis visionary that he researched the story, found this historical narrative, and contacted the press.

This is why I study sleep paralysis: it moves me, challenges me, and expands my worldview of how the extraordinary affects the lives of ordinary people.

Researcher David Hufford found in his research that those who have spiritual viewpoints and who are educated about the biological causes of sleep paralysis do not necessarily stop “believing” when they are Edumacated…. they simply integrate the two fields of knowledge.  People craft new integrative statements like: REM sleep is a brain state where the dead come to visit.2

Isn’t that fascinating? I’ve discovered for myself what David Hufford has suggested: that affirming that sleep paralysis occurs in a REM dream state doesn’t invalidate the opportunity for impact, for depth, and for novel information that sometimes comes to consciousness during these encounters.

Sleep paralysis is a profoundly spiritual state of consciousness in the old-fashioned definition of the term meaning “chock full of spirits.” Not because people have a hopelessly irrational and Medieval understanding of the world, but because, you know, they have experiences with entities that have historically been called spirits.

Interestingly, though, these encounters can take a radical turn sometimes, especially when our minds are not gutted with fear but rather reaching out in curiosity and trust. This is how some people have interpreted their SP as angelic visitations, and others have had contact with wise and healing figures.

Do I still have weird and spooky encounters in sleep paralysis? Oh yes. I have learned the methods that work for myself to eject when the going gets weird. Or I stick around and work through the fear, because that’s just part of the deal sometimes. But I also have had healing experiences and simply extraordinary encounters too that have expanded my worldview and enriched my life.

My first healing encounter with a sleep paralysis spirit

Here’s a sleep paralysis encounter I had over 10 years ago that changed everything. I had laid down for a nap and had a terribly upset and anxious stomach after a bad social exchange in a new city where I felt very alone:

I know I am in sleep paralysis. I am conscious of my sleeping body on the bed, lying on my stomach. There is a woman in front of me with dark curly hair. I feel her presence first – then she steps into the room. I feel her standing beside the bed, then sitting beside me. I cannot see her face. I am scared, but I decide to trust the woman. She then sits on my lower back – I can feel her weight. Then “gravity” rotates 180 degrees so it seems like I’m now lying on my back. I feel the woman’s hands on my chest area, and my whole chest becomes warm and tingly. I know she is healing me somehow, and I relax further into the sensation of being cared for. The heat extends through my body to my back, not just on the surface of my skin, a warm and deep glow.

As I noted in my book Sleep paralysis, the turning point in this experience is when I decided to trust the woman in front of me, even when the feelings of paralysis were  still occurring and the encounter was beginning to go down the nasty succubus route. I didn’t just hope, I decided once again to relax and to trust her. At that point, the encounter begins to take a positive turn, and I woke up refreshed.

More to the point, the anxious feeling in my stomach had completed dissolved. The encounter actually was healing.

Something changed for me that day. The world opened up, and I felt supported, even blessed. I knew for the first time that sleep paralysis could bring healing figures, not just nightmares as I had been taught. 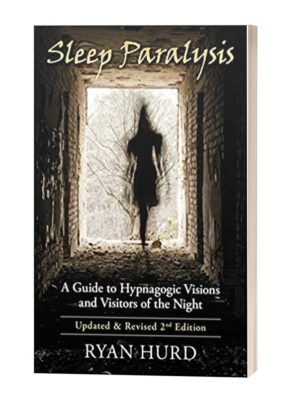 If you are interested in how to manage your sleep paralysis and become more proficient in digging into the mysteries of the Big Mind, check out my book Sleep Paralysis: Hypnagogic Visions and Visitors of the Night, now in its 2nd edition, updated and expanded!

First Image: a sectional from John Bauer’s The princess and the trolls (1913).